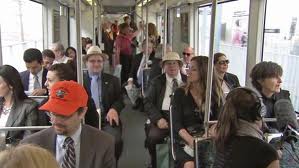 As gas prices spiked this year, so did use of public transportation.

Average weekday ridership on rail systems in September soared systemwide to 357,096, up nearly 12 percent over the same time last year and 16 percent over 2010.

Part of that increase is due to the expansion of the Metro system, officials said. The Expo Line opened in April and was extended to Culver City in June. The Orange Line busway in the San Fernando Valley was also extended to Chatsworth.

According to Kelsey Duckett of the Long Beach Press-Telegram,  Metro officials also pointed to the roiling fluctuations of gas prices as a significant factor in ridership.

Jasmine Smith of Long Beach said she sold her car in July because she couldn’t afford the price of gas nor the maintenance on her 2009 Chevrolet Malibu.

“Gas just became ridiculous,” said Smith, who used to drive five times a week to Santa Monica, but now takes the train. “I am a born-and-raised California girl, I have always driven, but there came a point where I had to turn in my keys.

in September, the trains between Long Beach and downtown Los Angeles carried an average weekday ridership of 92,120 customers, an increase of 10 percent; the Green Line between Norwalk and Redondo Beach recorded 46,393 riders, up 3.4 percent; the Gold Line between East Los Angeles and Pasadena logged 41,987 riders, rising 10.6 percent; and the Red and Purple subway lines between downtown Los Angeles and North Hollywood or Koreatown averaged 155,940 weekday boardings in September, a 2 percent increase.

Ridership on the Metro Orange Line, which now includes boardings from the new 4-mile extension to Chatsworth, soared to 31,787 average passengers per weekday, up 18 percent. In addition, the new Expo Line, which opened two new stations in June, reported 11,347 weekday boardings in its May start-up reports and surpassed 20,000 boardings in September.

“High gas prices were part of the reason for this large ridership increase,” said Michael Melaniphy, president and CEO of the American Public Transportation Association, in a written statement. “More and more people are choosing to save money by taking public transportation when gas prices are high.”

Metro officials also cited efforts to combat congestion, improve the environment and the use of social media technology in the rise in ridership.

They also pointed to the new generation of people who are choosing bicycles and public transportation over expensive car ownership.

Long Beach resident Brandon Larson, 28, has taken his bike on the Metro every day for the past year.

“It is super-convenient,” he said. “I take the Blue Line to downtown, get off and bike the rest of the way to work. Think of the benefits – great exercise, no parking costs, no gas costs and a shorter commute.”

Ridership on Metro’s bus system over the same one-year period held steady with a slight increase of less than 1 percent, averaging more than 1.18 million boarding passengers on an average weekday in September 2012, officials said.

According to the 2012 On-board Customer Satisfaction Survey released by Metro’s Research and Program Development Department, some 58percent of public transit users have smartphones they can use to find out when the next bus or train will arrive.

Real-time trackers such as NextBus and service alerts on Twitter and text messages are “communicating service schedules and changes to a greater degree, eliminating a certain amount of wait time,” according to the newly released report.

Offering a variety of ways to share the ride, Metro said it also coordinates an extensive car-pool and van-pool program.

Ridership increases are also being seen across the country.

Nationwide, public transportation ridership surged in July through September, when Americans took nearly 2.7 billion trips, an increase of 125.7million more trips, or 5 percent, over the same period in 2011, according to a report by the American Public Transportation Association.

This is the fifth consecutive quarter of public transit growth nationally.

Nearly 60 percent of the trips taken on U.S. public transit were for work commutes, Melaniphy noted.

“As we look for positive signs that the economy is recovering, it’s great to see that we are having record ridership,” he said.