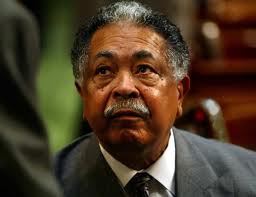 Funeral services will be held next week for Mervyn Dymally, a former California lieutenant governor, congressman and Assembly member.

A viewing will be held from 9 a.m. to noon Oct. 17 at Holy Cross Mortuary, 5835 W. Slauson Ave., in Culver City, according to spokeswoman Jasmyne Cannick. The funeral service will be held at 12:30 p.m.

When he was elected lieutenant governor, Dymally was one of the first two black people elected to any statewide office in the United States since Reconstruction, Cannick said. Colorado Lt. Gov. George Brown was the other.

Dymally represented southern Los Angeles County in Congress from 1981 to 1993 and returned to the Assembly from 2002 to 2008.

He is survived by his wife, a daughter, a son and three sisters.

A memorial fund has been established to honor his career and legacy. Donations can be made online at www.wepay.com/donations/dymallymemorialfund.

In lieu of cards, flowers and gifts, the family asked that donations be made in his name to “causes and organizations that he so passionately cared about — health and education,” Cannick said.
Advertisement