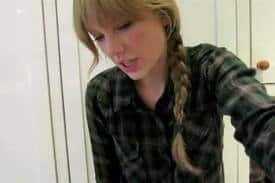 The music video for Taylor Swift’s blockbuster #1 single — “We are Never Ever Getting Back Together” – is the first ever to be shot in true 4K using Sony’s F65 CineAlta(TM) digital motion picture camera. Shot over one day recently at Sony Pictures Studios in Culver City the video premiered worldwide on Aug. 30.

According to Freshnews.com Swift worked with acclaimed director Declan Whitebloom and veteran DP Paul Laufer, who each brought extensive music video, film and TV credits to the project. Supporting the crew were the full resources of Sony Pictures’ Colorworks DI facility and Sony Electronics’ Digital Motion Picture Center (DMPC), lending their expertise on every aspect from pre-production to the final Digital Intermediate work.

“The video’s success hinged entirely on the precise timing of Taylor and all moving parts, down to every cue,” Laufer said. “Added to the mix was a camera that I hadn’t worked with before. The perfect world had to happen and actually it did.”

After creating a storyboard for the video with Swift, Whitebloom and Laufer started conversations with Sony about bringing the video to life using Sony’s F65 camera and its ability to deliver true 4K imagery.

“This is truly a breakthrough project, totally fitting for someone like Taylor, who is the biggest artist in the world,” said Whitebloom. “When I visited Sony’s Digital Motion Picture Center and saw the F65 first-hand, I was blown away. This is the future.”

After screenings of F65 footage, workshop sessions on the F65 at the DMPC and consultation on post workflow at Colorworks, it quickly became obvious to everyone that Sony’s 4K technology was the perfect match for this project. Laufer was especially impressed with the camera’s functionality, its ease of use and on-set flexibility, as well as its image quality.

“This camera delivers the best image of any digital technology I’ve ever seen,” said Laufer. “I love the skin tones. How the color is rendered is really impressive. And then being here at the Sony Digital Motion Picture Center and being able to watch the fruit of our labors straight-away on a huge 4K screen is such immediate gratification. The F65 is a great new tool that I look forward to using again.”

With the video needing to be turned around in a tight timeframe in order to meet premiere deadlines, the team needed a camera system that would not only match their concept and produce beautiful pictures, but also be an efficient production solution.

“Working with this camera in 4K completed and really accented my vision,” Whitebloom said. “The F65 seamlessly moved into the workflow and allowed great latitude with the colors and the depth of the picture. It’s given us a lot of bang for our buck.”

Swift herself was impressed with the Sony technology, how it helped to tell the story of her song and ultimately create a deeper, and more intimate, connection with her fans.

“Sony 4K lets my fans experience something brand new,” Swift said. “I love saying to them, ‘Hey, this is a cool, amazing thing I found, how do you like it?'”