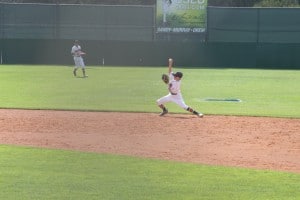 Westchester jumped out to an early 2-0 lead on an LJ Gilliam double, a Matthew Kanfer single and after a walk and a hit by pitch, a Carlos Jacobo sacrifice fly to center. Southbury scored a single run in the bottom of the first. Westchester added to it’s lead after Gilliam was hit by a pitch, advanced to second on a balk, and then scored again on a Kanfer single.

Neither team scored until the seventh when Westchester exploded for eight additional runs, with a booming double by Jacobo and a double to right center by Christian Amador, highlighting the explosion.

Matthew Kaplan, starting first basemen, commented “Connecticut played well early. We had some hits fall and the ln things got rolling. I expect that Connecticut will be a major factor in this tournament.”