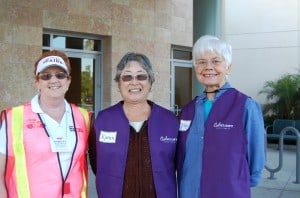 Those who groan at puns are free to substitute “major” for “driving” in the caption of this report regarding adaptations that create a safer automotive environment, as demonstrated when CarFit came to town and transformed the parking lot of the Culver City Senior Center into a potentially lifesaving venue for several hours during the morning of Saturday, July 28.
The event was arranged by Darren Uhl, the center’s Disability & Social Services Specialist.

“The first CarFit ever held on the Westside was here at the center in 2010,” he said, “and this is the second one we’ve held. We’re going to try to do it annually. It was originally Armando’s idea (Armando Abrego, Senior & Social Services Manager) and I implemented it by approaching AARP, one of the partners of CarFit. People come in wanting to see where they are on the scale of safe driving. It can be as simple as adjusting rearview mirrors correctly or getting a three-inch cushion to make the driving experience so much safer, but sometimes it takes outside experts to communicate this advice, and that’s part of what CarFit does.”

CarFit was developed by the American Society on Aging together with AARP, American Occupational Therapy Association and AAA, and provides a quick, comprehensive check of how well driver and car work together. Basically, the driver is asked simple questions by a trained professional, a checklist is completed, the entire process takes about 20 minutes, and the driver leaves with recommended car adjustments and adaptations, a list of resources in the area and higher levels of awareness and peace of mind, an excellent return for such a brief investment of time.

The drivers attending had pre-registered for the event. Upon arriving at the site they were directed to one of the several stations that had been set up in order to expedite completion of the process. One of those working the event was Bob Vatz who, in addition to being the CarFit Event Coordinator, performs other functions in the AARP Driver Safety Program, including Instructor and Instructor Trainer.

“This is one of the larger events,” Vatz said. “There are usually around 20 drivers who sign up, but here it’s 32. This is an ideal facility with a good parking lot that can be set aside for this application. It’s good when events are on at a time that facilitates getting volunteers, like this weekend event.”

He commented that, perhaps surprisingly, events are also held at university sites such as “Cal State Dominguez Hills. We learned that a group of seniors takes courses there, also at Cal State Long Beach, where a CarFit event is planned for the fall. Mostly the events are held at senior centers and retirement homes. We’ve found that men tend to outlive their safe driving years by six years and women by ten years, and we aim to make their driving years as safe as possible. If the person comes away with even one thing, it’s a success.”

If the experience of two drivers who participated is any indication, then Vatz can rest assured that CarFit did its job, and then some.

“This is a very thorough and wonderful program,” said Marilyn Hess. “We adjusted my seatbelt. There’s a knob that changes where the seatbelt goes across the body, and it needs to go across low enough because it’s designed to tighten on impact to restrain you.
If it’s not properly adjusted you can get injured when the airbag goes off. I learned ways to improve my line of vision. It was recommended that my side mirrors be adjusted further out to the left and right so I’d have a greater range of vision of what’s going on in the road, not so much on the side of my car. I strongly recommend this program.”

And Rose Friedman cited four instances where CarFit made a difference for her.

“Some weeks ago I was in a gas station,” she explained, “and I saw a lever hanging down from the wheel, something I’d never seen before and thought maybe my knee hit it and loosened it. The man at the station told me it was used to adjust the wheel, and moved it back into place. I told the CarFit person about this so he could check it, and he explained to me that the wheel has to be at least 10 inches away from the body to avoid injury if I’m in an accident and the airbag pops out. I didn’t know that. He checked with a ruler to make sure it was okay. Second, I learned there’s a button to operate emergency flashers, and that I could use it when I’m backing out so the car behind me can see. Third, my side mirrors were not adjusted properly. And he also showed me how to properly adjust my headrest. These are the little things you’re not aware of, so I’m very pleased I came. This is a wonderful event and it’s free, and that always helps!”

John M. Beringer Sr., the AARP Driver Safety California State Coordinator, told of an anecdote he’d shared with one driver at the event in hopes that the story would inspire some changes to be made to the car’s crowded interior. The anecdote is a good reminder that even highly trained professionals are not immune to easily preventable automotive mishaps.

“I was an engineer on a missile program,” he said. “One of the engineers on one of the computers used on the program had a habit of tossing old coffee containers and all sorts of other junk into the back seat of his car. One day while parked out in the parking lot in the hot sun his car burst into flames caused by spontaneous combustion from all that stuff.”

Stating that “normally we don’t warn people of this possibility, so it’s not a regular part of the CarFit program,” Beringer Sr. explained that he had mentioned it to this particular driver only because the back of the car was piled so high that vision out the rear window was blocked. “We do look for things other than the list of items shown on the CarFit inspection form,” he added.

And Chris Robinson, one of the CarFit volunteers, is looking forward to assisting further in senior safety. He has arranged to co-teach a driving class at the center, starting in August.

Stating that “occupational therapists help people fit into their environments,” Chris Nelms, the Rehabilitation Services Director for The Center For the Partially Sighted, was at the final station, handing out goodie bags containing information and items to the drivers who had completed the process.

“My director sent me over because she’s looking into developing a vision services program for senior drivers,” Nelms said. “Occupational therapists look at adaptations we can suggest.”

She demonstrated how the Handibar, which can also be used to break a window or cut a seatbelt if the driver is trapped in the car, easily fits in the driver’s side, and described other adaptive devices, including seatbelt extenders, pedal extensions and adapted mirrors. “Arthritis and other factors can reduce neck mobility, diminishing the ability to check blind spots,” she said, adding that “there are stretching exercises to help stay limber.”

Among wellness tips offered by CarFit are giving driving your full attention; maintaining strength, flexibility and endurance to meet the demands inherent in driving; eating healthy foods and hydrating sufficiently; getting enough sleep; following safety procedures, including always using your seatbelt; caring for your eyes by wearing sunglasses, avoiding smoking and visiting your eye care professional annually; and being aware of how prescription and OTC medications can create reactions that impair driving safety.

Although various adjustments and adaptive devices can make a tremendous difference, for some older drivers serious safety challenges may persist from a number of causes, including health issues, vision, hearing and reaction time. Seniors who are considering alternatives to driving and the hassles of parking for these and other reasons can benefit from a regular weekly program on public transportation that is presented at the center by volunteer Bonnie Cherko.

Having started with a pun, let symmetry be served by observing that the valuable services provided by CarFit have many recipients who are happy to toot its horn, so savvy drivers seeking safety information are encouraged to cruise on over to www.Car-Fit.org. It will be a trip well worth taking.