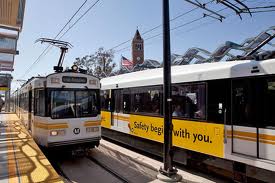 “Metro would like a thorough review of the facts. We take safety very seriously,” said Marc Littman, a spokesman for the Los Angeles County Metropolitan Transportation Authority. The inspector general “is looking at this. The PUC is looking at this. We want everything resolved.”

According to the Los Angeles Times, The top executive of the has asked the agency’s inspector general to investigate an alignment problem on the new Expo Line that experts say presents a risk of derailment if left uncorrected.

Art Leahy, Metro’s chief executive officer, announced during the July 26 board meeting that he had directed Inspector General Karen Gorman to look into the junction at Washington Boulevard and Flower Street, where the Blue and Expo light rail lines merge just south of downtown Los Angeles.

Since June 2010, Metro, the California Public Utilities Commission and the Exposition Metro Line Construction Authority have been trying to eliminate a flaw in the track layout that was damaging the wheels of Blue Line trains, creating a derailment risk on one of the nation’s busiest transit routes.

Because of the problem, Metro has yet to officially accept the junction work from the Expo construction authority, which built the first phase of the line and opened it April 28, two years behind schedule. Metro takes over rail operations once a segment is completed.

Last week, the utilities commission ordered Metro and the Expo construction authority to replace a key piece of track in the junction that helps guide train wheels through a switch used by southbound Blue Line trains. Officials had tried welding extra metal to the track to solve the alignment issue, but the work has had to be repeated twice in the last few months because of cracking and chipping.

As officials seek a permanent solution, Metro officials say the risk of a derailment has been eliminated for now by the repair work, a stringent inspection program imposed by the PUC and having trains slow down as they go through the junction.

“This investigation will sort through the facts and give the board a clear account of what happened and show them which safety issues need to be resolved so we can have the safest rail system possible,” said Michael Cano, the transportation deputy for county Supervisor Michael D. Antonovich, who chairs the Metro board.

Susan MacAdams, a transit consultant and track expert who once worked for Metro, said that she told the inspector general’s staff about the problems at Washington and Flower almost a year ago, but that nothing was apparently done.

MacAdams said Metro officials dropped her as a consultant after she complained about the tracks and other issues. Littman said he could not comment on her departure because it is a personnel matter that the agency must keep confidential.

The inspector general “should have been looking at this before they opened the line,” she said. “‘Safety First’ is on their pencils. Why didn’t we do this a year ago?”

One of the latest reports submitted by Metro to the PUC shows that the alignment problem might be cracking wheel truck brackets that support one of the two braking systems on light rail cars. The document states that from April to June, damage “possibly related” to the junction was noted on seven vehicles.

Metro officials said the cracking has occurred on old brackets, many of which have been replaced with new and stronger supports that have shown no evidence of damage. They added that the problem is minor and does not present a risk of derailment.

“There has been absolutely no damage to the wheels, just normal wear and tear,” said Richard Lozano, Metro’s executive officer of rail vehicle maintenance.