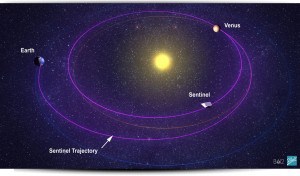 A HALF-MILLION ASTEROIDS have orbits that could someday take them close to our home planet. We’ve been fortunate that none have hit the Earth since 1908, when an asteroid or comet struck the Siberian forests with devastating effect. Now, a new space mission has the goal of protecting us from such an event happening again.

In a press conference June 28 at the California Academy of Sciences, the B612 Foundation unveiled plans to build, launch, and operate the first privately funded deep space mission. A space telescope named “Sentinel” will be placed in orbit around the Sun, ranging up to 170 million miles from Earth, for a mission of discovery and mapping.

“The orbits of the inner solar system where Earth lies are populated with a half-million asteroids larger than the one that struck Tunguska (June 30, 1908), and yet we’ve identified and mapped only about one percent of these asteroids to date,” said Ed Lu, Space Shuttle, Soyuz, and Space Station astronaut, now Chairman and CEO of the B612 Foundation. “During its 5.5-year mission survey time, Sentinel will discover and track half a million near-earth asteroids, creating a dynamic map that will provide the blueprint for future exploration of our solar system, while protecting the future of humanity on Earth.”

Asteroids are a scientific and economic opportunity in that they contain the original building blocks of the solar system. They are targets for future human exploration, and may contain valuable raw materials for mining. They are also a threat, in that they can pose great risk to humanity here on Earth. To take advantage of these opportunities and deal with this threat, we need to know not only where each of these asteroids is now, but also to project where it will be in the future.

“For the first time in history, B612’s Sentinel mission will create a comprehensive and dynamic map of the inner solar system in which we live—providing vital information about who we are, who are our neighbors, and where we are going,” said Rusty Schweickart, Chairman Emeritus of B612 and Apollo 9 astronaut. “We will know which asteroids will pass close to Earth and when, and which, if any, of these asteroids actually threaten to collide with Earth.”

The B612 Foundation is working with Ball Aerospace in Boulder, CO, which designed and will be building the Sentinel infrared space telescope with the same expert team that developed the Spitzer and Kepler space telescopes. It will take about five years to complete development and testing to be ready for launch in 2017–2018. The launch vehicle of choice is the SpaceX Falcon9.

Sentinel will scan the entire night half of the sky every 26 days to identify every moving object with repeated observations in subsequent months. Data collected by Sentinel will be sent back to the Earth via NASA’s Deep Space Network, which also will be used for tracking and navigation. JPL will conduct a comprehensive hazard analysis, making orbit determinations and threat assessments.

The B612 Foundation is working with the California Academy of Sciences and the Planetary Society in the development of education and research programs during the next decade, and encourages all interested parties, including students, to contact B612 directly via its website: www.b612foundation.org

“We believe our goal of opening up the solar system and protecting humanity is one that will resonate worldwide,” said Lu. “We’ve been given a gift, and the gift is that we have the ability now to go out there and actually do something which positively affects the future of humanity on Earth.”