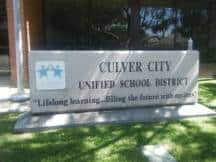 At its June 26 meeting, the Culver City Unified School District Board of Education will discuss, in closed session, the possible selection of a new superintendent to replace Patricia Jaffe, whose retirement will be effective on June 30.

While the Board may or may not reach a decision on the hiring of the superintendent and announce it at the meeting, the five board members will discuss a variety of other issues in open session, including the 2012-2013 CCUSD budget, a district energy services contract, a joint-use agreement between the District and the City of Culver City and a proposed food service program price increase.

The public portion of the meeting will begin at 7 p.m. on Tuesday, June 26 in the Mike Balkman Chambers at Culver City Hall, 9770 Culver Boulevard.