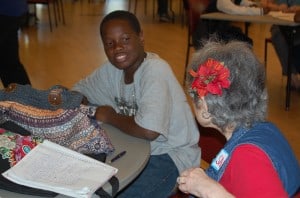 “Time is money” is the mantra of someone I know who speed-walks the self-imposed treadmill of his life and would have his cell phone surgically implanted if that were possible. It was therefore not surprising that when I started to tell him about the Living History Project, his response was, “Just give me the quick and dirty, for God’s sake!”

Okay. Several senior volunteers, including myself, met twice with a group of elementary school children through LEAP, an after-school program, and got to know each other. For everyone else, please read on.

Our first meeting on May 18, which was described in the May 26, 2012 post, was a revelation for the children, many of whom arrived at the Culver City Senior Center with expectations that they would be paired with elderly folk in wheelchairs, lined up in a nursing home. And it was a learning experience for the senior volunteers as well.

Following that meeting Jill Thomsen, the senior center’s Volunteer Specialist, told me that she found the LEAP program to be “a lot of fun for the seniors. I love to watch the interviews going on and see the questions the kids have come up with. One that I saw written down was ‘do you like Kobe’s, LeBron’s, MJ’s, KD’s shoes?’ I would have LOVED to see when one of the kids asked that because even I had to figure out what it meant! I can’t wait to see what the kids have written in their biographies of their senior partners!”

Her curiosity was satisfied on May 30, when we all reassembled at the center.

I was already seated and waiting at a table when the children trooped in. Jeremy and Jamaal spotted me and, all smiles, ran over, arms out for hugs. When I greeted them by name, Jeremy was surprised that I had remembered. I don’t think these boys realize just how memorable they are.

Each carried a shoebox they had covered and decorated as a keepsake for me, and they were eager to see my reaction. I was charmed and touched. As I expected, the dominant theme was sports.

Jamaal’s box contained a photo of him in football uniform, plus sports award patches. Knowing I had Kings fever (I was born in Canada, hockey’s in my blood), he assured me the patches would bring my team luck for that night’s Stanley Cup opener – and they did!

Jeremy had written the names of prominent sports figures inside his box, all of whom I recognized. His mouth fell open when I tapped the name he’d printed the largest and said, “Oh, yeah, Derrick Rose. He’s with the Chicago Bulls.” Jamaal just beamed at me in proprietary fashion as he told Jeremy, “She knows these things.” I could almost hear the click as Jeremy reshuffled his mental Rolodex to move me to the cool section.

They also presented me with the bio they’d created as well as a delightful drawing by Jamaal. The drawing, on orange construction paper, now reigns next to my computer. It contains a large heart, a flower, lots of stars and a vertical depiction of my name, bordered in little hearts (“I wrote you a poem,” Jamaal said):

Given my age, “resting” was probably a hopeful suggestion as “rest” is not prominent in my vocabulary. The boys had picked up on that during the earlier meeting when they learned that following my retirement from a career in commercial mortgage banking, my tick tocks are thoroughly and happily allocated between art projects, cartooning, writing, volunteering and getting together with friends.

And as for the bio (“We really worked hard on it,” Jeremy emphasized), the last sentence said it all: “Most of her time, she enjoys having fun!” Absolutely right, and I’m so grateful for that.

Just as our first session on May 18 was drawing to a close I had asked the boys what books they read for pleasure. As I am an avid reader I was disturbed to learn that the answer was zilch. I then requested that, as a personal favor, before our next meeting they talk with their librarian, describe their interests, and ask for recommendations. “You just haven’t met the right book yet,” I assured them.

The moment of truth was at hand.

“Remember our conversation about talking to the librarian?” I asked.

“Did you have a chance to do so?” I asked, fingers crossed, thinking, “Say yes! Say yes!”

Jeremy was enjoying a book he’d checked out. “It’s all about football,” he said, definitely one of his passions. And Jamaal was very enthusiastic over a “Dear God” book, telling me it’s about children who prayed to God for advice about a number of different situations.

I was ecstatic and praised them for taking this first step. I could not have asked for a better outcome, as I knew reading could make a monumental difference in their lives. It had in mine.

Public libraries had been a source of sustenance and refuge for me as a child. I shared with the boys that some years ago I had visited friends in Portland, Oregon. A major library there that had been closed for two years for renovation had just reopened, so of course I visited it. I was tremendously impressed and used that experience as the theme for the personal holiday card I designed that year. The card included a statement that “a library is a garden of knowledge where we can begin, become, transform, create, discover, imagine, seek, dream, inquire, experience, hope, explore . . .”

More than anything, I wanted to communicate that to Jeremy and Jamaal.

I had brought two of those cards to our final meeting. They bore a message I had written to each boy that included my delight at having met them and my wish that they develop a joy for reading. They were awed. I was gratified to see them intently reading the message and examining the card. They were very taken by my drawing of a little girl with glasses, braids and butterfly wings sitting on a leaf and happily reading. I told them I had modeled her on myself as a child, because the opportunity to learn and be exposed to the worlds into which books are the doorway had transformed me with the same power as if I’d been given wings. They nodded in understanding. YES!

As our private table time drew to a close, I asked about their summer plans and learned that Jamaal would be visiting relatives in Las Vegas and Jeremy would be headed to Chicago to spend time with family there. We chatted and relaxed together until Jill had everyone adjoin to the patio, where chairs had been arranged in a circle and a table with snacks had been set up. The children were instructed to take turns standing and telling something they’d learned about their senior partners. It was all very warm, spontaneous, perceptive and delightful, a different and more engaging vibe than last year, when everything took place indoors and the children took turns standing in front of the group to read the written bios.

I melted when Jamaal and Jeremy described me as “sweet, kind, and a wonderful artist.” They spoke of my having been very poor as a child but succeeding because I got an education. When we later went around the circle and it was time for the seniors to express themselves, I commented on how bright these two boys were, that they had good hearts as well as brains, and that I knew they would succeed in life. I also said that we had a private deal among ourselves and they had kept their part, so in exchange I had promised to learn about football. That got a laugh from everyone.

I particularly remember one senior volunteer who, when it was her turn to speak, got up and resoundingly declared, “I’m in love!” That pretty much encapsulated this experience for us all.

It was now time for the children to board the bus. More hugs. This time we held on a little longer.
LEAP’s motto is “learning doesn’t stop when the school day ends,” and by participating in this project that proved true for me as well. I feel privileged to have met these children who are anything but silver-spoon babies. They are survivors, imbued with a strong sense of self and embracing admirable values.
As they left a thought flashed into my mind that children are the promise we make to the future, a promise that is strengthened through the efforts of organizations such as LEAP.
Information about LEAP, a non-profit 501(c)3 corporation, is available at www.leapusa.org.