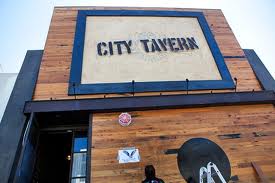 To celebrate their one-year anniversary, City Tavern in Culver City will be hosting a fundraiser for the Culver City Historical Society on Tuesday, April 3rd. Since opening last year, City Tavern has quickly become a neighborhood favorite, well respected for their extensive craft beer selection and delicious menu. The choice to benefit the City Tavern Historical Society for this event came from their desire to show appreciation for the city that has welcomed and supported them over the past year.

From 7-10pm, City Tavern will be serving a special Anniversary Cocktail (champagne with cherry bitters, $9), as well as a City Tavern Sampler Board with a selection of menu favorites (includes shrimp and grit poppers, house pickled veggies, mini pimento cheese, pulled pork one bites and grilled vegetable roulades with smoked salt).

After 10pm, City Tavern will be offering a selection of their craft cocktails, all available for $9 as part of their “Under 10 after 10” program. Come and bend an elbow in honor of the Culver City Historical Society and the next year at the Tavern.