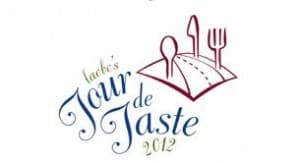 The crowd of cycling enthusiasts who gathered on Parcel B early on Sunday March 4 were mostly folks who had already put in a good ride just getting to Culver City. The Los Angeles County Bicycle Coalition chose Culver as their start point for the “Tour de Taste” not just for our great bikeways, but because of our culinary fame. Bike Coalition organizer JJ Hoffman noted “We do so much on the Eastside of LA- we’re all over downtown, we do Pasadena, Glendale- We thought it was really high time to do a Westside event, and Culver City is a real destination these days.”

With support from the Culver Hotel and SportEve, the event gathered bikers to roll down the Ballona Creek path to Marina del Rey and start their grazing with a free taco at Chipotle. When the first contingent of 40 or so cyclists arrived, the restaurant was overwhelmed. “We get about 3 or 4 customers about this time of day, so let us go cook some food and we’ll be right with you,” offered the manager. They did open the doors and feed the crowd, and the first group of cyclists set off again for Culver City as the next wave was arriving.

“I don’t even recall how I got involved,” offered volunteer Jennifer Wright “I just love to bike and I’ve been with LACBC for years. It’s a great group.”

The ride marshals were unfailingly helpful, and everyone kept moving at a good pace through the day.

After the last leg of the ride back up the creek to Parcel B, riders were treated to a feast; restaurants such as AMMO, Pete’s Cafe & Bar, and the Larchmont Grill served up some wonderful fare, and New Belgium poured “Fat Tire Ale” for the hot and thirsty riders.

John Riddle, co-author of “Where to Bike in Los Angeles,” proclaimed it an inspiring ride. “The Ballona Creek bike path is always so pleasant- all the greenery and the birds- and offering to feed everyone certainly makes it a day worth doing.”

Jim Lamm of the Ballona Creek Renaissance was there, tirelessly educating riders about the history of the creek and the ecosystem that we had all been admiring.

Hoffman said it was a good turnout and that she also hoped to double the numbers for the next event. How could it be improved ? With a great workout and fantastic meal, it was the best both worlds.

Editor’s note – got to www.la-bike.org for more info about upcoming rides and membership. And everyone who thinks Judith needs a new bike and a great helmet -please note the donate button on the upper right.