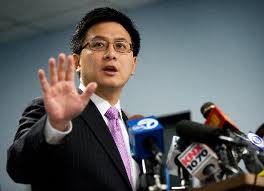 California State Controller John Chiang will be honored during the Culver City Democratic Club’s 60th Anniversary celebration and Officer Installation Luncheon at the historic Culver Hotel. The Club’s past presidents will also be honored during the February 26th reception. Attendees will enjoy a three-course lunch in the Hotel’s classic 1920’s Grand Lobby, and hear the State Controller address the Club.

The Culver City Democratic Club has been an active political force for 60 years. The 1952 presidential campaign was the catalyst that resulted in the Club’s establishment. A group of interested citizens met to listen to radio broadcasts of Adlai Stevenson’s speeches. While Stevenson lost to Eisenhower, the Club survived, providing a new vehicle for political expression here in Culver City.

In 1953 the Los Angeles County Democratic Central Committee issued the club a charter. In addition to its involvement in national and state issues, the club was very active on the local political scene. Members petitioned the city for streetlights and sewers, and they were successful. The Club also participated actively in the successful campaign to increase pay for Culver City Police and Firemen.
The Club’s monthly meetings on diverse topics cover local, national and international issues. Recent guest speakers have included Tom Hayden, State Assemblymember Holly Mitchell, local elected officials such as former Mayor Christopher Armenta, students, radio personalities, and a host of residents, local activists and non-profit leaders.

Throughout the years, the Culver City Democratic Club has been a vital force in electing candidates to local office, as well as to state and national positions. Many members of Culver City’s City Council have been members of the Club. Recent milestones include electing the Democratic Club’s first African-American President, Bill Wynn, and moving the Club’s account from a major commercial bank to a local credit union. More information can be found on the Club’s new website: culvercitydemocraticclub.com/ or contact Diane Rosenberg at 310-39805328