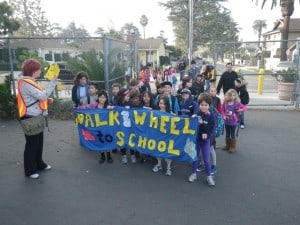 If you live in the neighborhoods around Carlson Park or Rancho Higuera, you may have noticed an army of Hiking Vikings marching in formation on Friday mornings. The Safe Routes to School Committee at Linwood Howe Elementary School has launched a weekly Walking School Bus. The new program began on January 20, and the “buses” will run every Friday morning through the end of the school year.

Linwood Howe Principal Amy Anderson was ecstatic about the success of the launch: “The excitement — both student and parent — was energizing. It was great to see many new families participating. What a positive way to start a school day!”

Amy proudly presented the first Hiking Viking Trophy to Lili Glassman’s second grade class on the Monday after the launch. The class with the best participation gets the trophy (and bragging rights) for a week.

A Walking School Bus is basically a carpool, but without the car. Within the last generation, there has been a huge shift in how students travel to school, with the private automobile becoming the dominant form of transportation. At Back-To-School Night last fall, Anderson asked parents to raise their hands if they walked to school when they were kids. The vast majority of parents raised their hands — and most of those hands went down when she then asked if they walked with their kids to school now. This shift from walking to driving has come at a price: increased traffic around schools, more traffic accidents involving students, increased pollution, and increased rates of childhood obesity and related health issues. In response to these disturbing trends, Walking School Bus programs have been cropping up around the country.

It took a small but dedicated group of volunteers to implement the Walking School Bus plan at Linwood Howe. Gayle Haberman, a Linwood Howe parent, brought in the talents of Uyen Ngo, who works at the Los Angeles County Department of Public Health with Gayle. Uyen did an impressive amount of research into Walking School Bus programs around the country, and worked with the Linwood Howe Safe Routes Committee to determine the best plan of action. The plan included decisions about the best neighborhood routes, which days the “buses” should run, and incentives for the students, all with the goal of maximizing student/parent participation with a sustainable level of parent volunteer effort. Cary Anderson, another Safe Routes Committee member, provided invaluable feedback from the perspective of a local resident during the whole process, and was on hand to make sure the launch of the Walking School Buses went smoothly.

Of course, even the best plans require a lot of legwork, and that is where kindergarten parent Yvonne McLauchlan stepped in. Yvonne handled distribution of information flyers that went to local residents along the designated routes. Yvonne also created the laminated punch cards for each student to keep track of participation. The punch cards are particularly important, since students earn rewards for walking — after 3 ‘bus trips’, a student will receive a Hiking Viking t-shirt, and after 10, a Hiking Viking water bottle. In addition, there will be end-of-the-year prizes for perfect attendance.