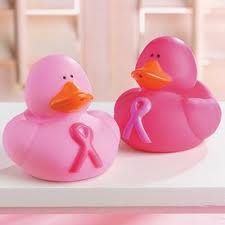 It’s been a whirlwind of pink ribbons being torn down, letting in some much needed light. It’s been an avalanche of cash turning in another direction. It’s been the talk of the town.

As someone who has been female my entire life, I have to say it’s good to see the light shining. With the news of Karen Handel’s resignation, the light gets even brighter. We do not need charities that allegedly support women’s health working against women’s rights. Whatever self-serving insanity has been going on behind all those pink ribbons, the supply lines have been cut.

I recall a moment several years ago when I walked into my local Pavilions, and was visually arrested by the amount of pink everywhere. There were pink ribbons on the yogurt, on the cereal, on the coffee; I think they were on every product in the store with the exception of apples and onions. As someone who has worked for many a non-profit organization, I knew that any non-profit that can pull off that kind of marketing certainly doesn’t need my petite donation. In fact, any non-profit with that kind of marketing arm isn’t working on their cause. They are working on their marketing. I wrote Komen off that very day.

At one of the non-profit organizations I worked for back in the 20th Century, and at one of the initial board meetings, someone asked what the organization’s strategy was. The answer was quick. “We want to solve the problem; we want to put ourselves out of business!” The response was even faster. “Well, now, hold on just a minute, I don’t think that’s the best strategy to start out a campaign.”

There is the deadly truth of the good cause. As soon as you decide your mission is to solve a problem, that problem becomes your bread and butter, your raison d’etre, your motto and your flag. Solve it, and you are redundant.

With their unassailable fundraising ability, flying their pink ribbons, Susan G.Komen long ago entered into an arraigned marriage with Big Pharma and the cancer industry. They are not looking for a “cure.” They are looking for more drugs to sell you. Really expensive drugs.

As for Planned Parenthood, I will tell you the tale of how they saved me.

When I was a young woman living in Venice, I felt ill. Really ill. It just wouldn’t go away, and I kept feeling worse. I could barely get out of bed in the morning. During my lunch hour, I sat in my car and slept. My friends were concerned that I was so out of it; I was just exhausted all the time. My girlfriend Laura finally offered “Hey, Jude, you know, you might be pregnant.”

I assured her this was simply not possible. I had been give a rock-solid diagnosis of infertility several years before, when coming off of birth control pills had left me with bizarre symptoms and apparently no hope of ever having kids. Besides which, my boyfriend was in Berkeley at grad school, and I had not even seen him in months. Maybe three months.

Eyebrows were raised. “Stranger things have happened. Go find out.”

Sick with fear, I went to Planned Parenthood.

I still remember walking in the door, feeling embarrassingly young and so very tired. I just wanted to lie down. I filled in the forms, I answered the questions, and I let them take some blood for a test. I sat and I waited. I thought of every possibility while I sat and I waited, although I was so tired that even thinking was a heroic effort. It seemed it was either pregnancy or death, neither of which seemed at all appealing.  When the charming young man in the white lab coat came back in the room, he was smiling. “Ok, we have it figured out.”

I looked at him waiting for him to pronounce my future.

“You are not pregnant.” Oh good, I thought, oh dammit, oh well, I guess that other doctor was right. I’ll just never have kids.

“But you have so few red blood cells, I seriously don’t know how you walked in here on your own strength. You’re the most anemic person I have ever seen.” He gave me a bottle of iron pills, and asked if I was getting a balanced diet. He assured me I was not going to die, at least not from anemia, any time soon. I lay down on the examining table, and I cried with relief.

Hours later, I was so totally revived I was incredulous. I felt so much better it was unbelievable.  Planned Parenthood’s service had nothing to do with anything even as controversial as a condom, and it made a huge difference for me.

For all the corporate funding pouring into Komen breast cancer is becoming more and more common, while survival rates aren’t going down—unless you include the extra years of life accounted for by earlier detection. Which would be a a credit to, y’know – Planned Parenthood.

Komen’s research focuses almost exclusively on bringing women into treatment as early as possible and finding more drugs that Big Pharma can profit from. This is a money maker for all of them. Why would they want to cure breast cancer? You can’t be putting yourself out of business. That’s no way to run a campaign.

Planned Parenthood will be around a long as parenthood needs planning. They are offering easy access to very simple health care that anyone can benefit from. Against abortion ? Don’t have one. But don’t force people without resources to risk STD’s, pregnancy or cancer (or anemia) because we are the only developed country in the world without health care for all. Planned Parenthood deserves every drop of funding it can get.

Bringing it all the way home- support the Youth Health Center at CCHS. The best way to cure any health problem is with prevention and education.