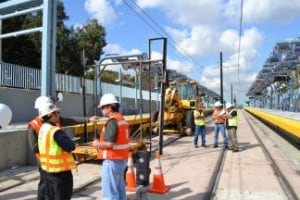 The Expo Line, L.A.’s newest light rail system, is a big step closer to actually carrying passengers. According to KPCC News, it will begin its final testing phase next Monday, Jan. 30.

When it’s ready to roll, the Expo Line will take people from downtown L.A. to Culver City. Riders will be able to connect with other Metro lines at 7th Street/Metro Center station in downtown L.A.

Art Leahy, CEO of the Metropolitan Transportation Authority, says that the final phase will feature a higher volume of traffic in order to simulate normal service.

“That’ll help train operators [to] acquaint themselves with the new track,” said Leahy, “while nearby communities get used to the new trains.”

As cited by KPCC, when Metro opened the Gold Line’s Eastside extension, final testing took about a month.

If that’s the case with Expo, Angelenos could find themselves on a train to the Westside as early as March.