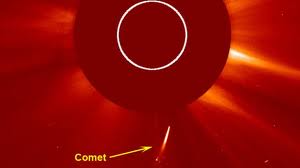 Seeing a Comet Plunge into the Sun —

On July 6, 2011, a comet was caught doing something never seen before: plunging into a scorching death as it flew too close to the Sun. That the comet met its fate this way was no surprise—but the chance to watch the event first-hand amazed even the most seasoned comet-watchers.

“Comets are usually too dim to be seen in the glare of the Sun’s light,” says Dean Pesnell at NASA’s Goddard Space Flight Center in Greenbelt, Md., the project scientist for NASA’s Sun-orbiting Solar Dynamics Observatory (SDO)—which snapped images of the comet that were then combined to create a movie. “We’ve been telling people we’d never see one [a comet] in SDO data.”

But an ultrabright comet, from a group known as the Kreutz comets, overturned all preconceived notions. The comet can clearly be viewed moving in over the right side of the Sun, disappearing 20 minutes later as it evaporates in the searing heat. The movie of this event is more than just a novelty. As detailed in a paper in Science magazine appearing January 20, 2012, watching the comet’s death provides a new way to estimate the comet’s size and mass. The comet turns out to be somewhere between 150 and 300 feet long and to have about as much mass as an aircraft carrier.

“Of course, it’s doing something very different than what aircraft carriers do,” says Karel Schrijver, a solar scientist at Lockheed Martin in Palo Alto, Calif., the first author on the Science paper and the principal investigator for the Atmospheric Imaging Assembly instrument on SDO, which recorded the movie. “It was moving along at almost 400 miles per second through the intense heat of the Sun—and was literally being evaporated away.”

Typically, comet-watchers see the Kreutz-group comets only through images taken by a coronagraph, a specialized telescope that views the Sun’s fainter out atmosphere, or corona, by blocking the direct blinding sunlight with a solid occulting disk. On average, a new member of the Kreutz family is discovered every three days, with some of the larger members being observed for 48 hours or more before disappearing behind the occulting disk, never to be seen again. Such “Sun-grazer” comets obviously destruct when they get close to the Sun, but the event had never before been witnessed.

The journey to categorizing this comet began on July 6, 2011, after Schrijver spotted a bright comet in a coronagraphic image produced by the Solar and Heliospheric Observatory (SOHO). He looked for it in the SDO images and much to his surprise he found it.

The fact that one can see this comet against the background of the Sun means there is some physical process going on that is not yet understood. “Normally,” says Goddard’s Pesnell, “a comet passing in front of the Sun absorbs the light from the Sun. We would have expected a black spot against the Sun, not a bright one. And there’s not enough stuff in the corona to make it glow, the way a meteor does when it goes into Earth’s atmosphere. So one of the really big questions is why do we see it at all?”