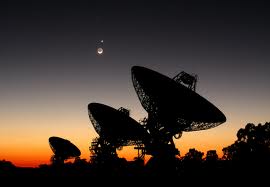 “LISTENING UP” TO A SKY FULL OF RADIO WAVES – The world’s most famous radio telescope will become the “Karl G. Jansky Very Large Array” to honor the founder of radio astronomy, the study of the Universe via radio waves naturally emitted by objects in space. The National Radio Astronomy Observatory (NRAO) announced the new name for the National Science Foundation’s Very Large Array (VLA) at the American Astronomical Society’s meeting last week in Austin, Texas. The new name will become official at a rededication ceremony at the VLA site in New Mexico on March 31.

After more than a decade of work, the VLA, originally dedicated in 1980, is nearing completion of a technological transformation that has turned it into a completely new and vastly more capable radio telescope.

“When Karl Jansky discovered radio waves coming from the center of the Milky Way Galaxy in 1932, he blazed a scientific trail that fundamentally changed our perception of the Universe,” said NRAO Director Fred K.Y. Lo. “Now, the upgraded VLA will continue that tradition by equipping scientists to address outstanding questions confronting 21st-Century astronomy.”

“It is particularly appropriate that the upgraded Very Large Array honor the memory and accomplishments of Karl Jansky,” Lo explained, adding that “the new Jansky VLA is by far the most sensitive such radio telescope in the world, as was the receiver and antenna combination that Jansky himself painstakingly developed 80 years ago.”

Karl Guthe Jansky (1905-1950) joined Bell Telephone Laboratories in New Jersey in 1928, immediately after receiving his undergraduate degree in physics. He was assigned the task of studying radio waves that interfered with the recently-opened transatlantic radiotelephone service.

After designing and building advanced, specialized equipment, he made observations over the entire year of 1932 that allowed him to identify thunderstorms as major sources of radio interference, along with a much weaker, unidentified radio source. Careful study of this “strange hiss-type static” led to the conclusion that the radio waves originated from beyond our Solar System, and indeed came from the center of our Milky Way Galaxy.

His discovery was reported on the front page of the New York Times on May 5, 1933, and published in professional journals. Janksy thus opened an entirely new “window” on the Universe.

“This discovery was like suddenly being able to see green light for the first time when we could only see blue before,” said Lo.

Discoveries made with radio telescopes have earned four Nobel Prizes. Those include the discovery of pulsars; detection of the microwave background radiation that is the remnant heat from the Big Bang; and the first indirect evidence for the gravitational waves predicted by Albert Einstein. Although Karl Jansky was never honored for his discovery during his lifetime, his name has been memorialized in the scientific unit “Jansky” that astronomers use every day as a measure of the strength of astronomical radio-signal sources.

The original VLA was authorized by Congress in 1972, and astronomers began using it for research even before its dedication in 1980. To date, more than 2,500 scientists from around the world have used the VLA for more than 13,000 observing projects.

The new Jansky VLA is ten times as sensitive to faint radio emission as the original VLA, and it covers a radio frequency range three times as broad.