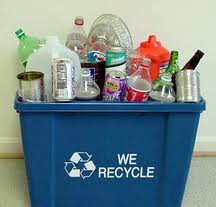 An increase of more than 20 tons of recycling s a pretty nice pick up for a recycling program, and Culver City has every reason to be pleased. Household trash can be several times more expensive to send to a landfill than to recycle, and sorting the trash is the green thing to do. So, how are we doing ?

According to the Los Angeles Times, Culver City’s pilot program was among those created around the state to make recycling in multifamily dwellings easier. It has enlisted 27 complexes — more than 3,000 units — to take part. On one collection route that consists of about 80% multifamily homes, the amount of recycled material increased from 85 tons in April to 100.5 tons in September, according to city records.

Residents get bags or small crates to collect the recycling items in their apartments. Signs have been posted near recycling bins. In some cases, the city has found creative ways to get the recycling from the building to the truck.

Last month, less than 40% of the 7.1 million apartment dwellers in California can recycle at home. State law next year will require recycling in most complexes of five units or more.

Culver City, which has mostly single-family homes, diverts about 60% of its trash from landfills, said Damian Skinner, environmental programs and operations manager for the city. But even when people are willing, recycling can be difficult or confusing.

Many condos or apartments have trash chutes, so residents who want to recycle must walk those items to the bin, Skinner said. “The challenge is to make it part of the culture.”

Diane Rossiter, general manager of the 430-unit Tara Hill complex off Jefferson Boulevard, said her staff has to think about what, why and how people recycle. “We have to work with residents,” she said.

Twelve recycling bins are located throughout the complex, and the staff checks to make sure that only materials that can be recycled go into them, Rossiter said. Signs above the bin list what’s accepted and what isn’t.

Nearby, at the Raintree complex of 354 condominiums and 210 town homes, general manager Greg Ranier said adjustments have been made for space. The condo area has big blue recycling bins, but the town house part of the development didn’t have space. So residents use blue bags that get left next to trash bins.

Culver City uses various kinds of trucks to make recycling work: small transfer vehicles that can maneuver into tight spaces and trucks with arms that can pick up bins from the side or the front, Skinner said.

There’s a carrot to recycling, especially for people who own apartments. Skinner said a 10-unit build-
ing with two big trash containers would pay $280 a month for weekly pickup. If it diverted 50% of that trash to recycling, the bill would go down to $170 month.

No matter how efficient residents get at recycling, however, Skinner said, reducing waste is a better goal.

“With recycling, the markets vary,” he said, referring to markets for recycled materials. “It depends heavily on China’s demand. Sometimes recycling pays for itself; sometimes it doesn’t.”

At the French Quarter, a complex in the Fox Hills where Sharon Brown lives, the two buildings are connected through a garage. Because of where the sole recycling bin was placed, it was inconvenient for one of the buildings to use, she said. And it was painted the wrong color. So Brown went to the city.

“I asked, ‘How come the bin isn’t at least blue?’” she said. Lettering had been scraped off, so it was not obvious that the bin was for recycling.

Once she learned that the 47-unit complex could get free bins, she went to work educating people about what and how to recycle. Since May two bins have been available, and the complex has already eliminated one of its garbage pickups, at a monthly savings of $300 for the homeowners, she said.