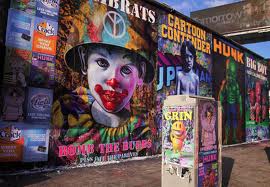 POST NO BILLS proudly announces its first fall solo exhibition featuring premium quality multiples from America’s Premier Pop Iconoclast in its Venice Beach based print shop. ENGLISH 101 features exclusive new limited edition prints and hand-finished multiples by one of the most prolific and recognizable artists today, Ron English, who has bombed global landscape with unforgettable images, on the street, in museums, in movies, books and television. With prices ranging from $20 to $4000, the exhibit offers pieces for any sized budget.

Ron English coined the term POPaganda to describe his signature mash-up of high and low cultural touchstones, from superhero mythology to totems of art history, populated with his vast and constantly growing arsenal of original characters, including MC Supersized, the obese fast-food mascot featured in the hit movie “Supersize Me,” and Abraham Obama, the fusion of America’s 16th and 44th Presidents, an image widely discussed in the media as directly impacting the 2008 election.

The term POST NO BILLS is commonly identified in stencil form – on barriers erected around construction sites in an effort to deter clean walls from being altered. Generally speaking, this practice produces a contrary effect. Our founders subscribe to the notion that breaking rules generally inspires more ingenuity than following them. Which is why POST NO BILLS was created.

POST NO BILLS is an inventive print shop with a focus on hand made limited edition multiples. We are a singular destination where groundbreaking artists from around the globe can sell their wares directly to passionate collectors at all levels. Editions will be made on the premises with a true dedication to quality. Come find us at PostNoBillsShop.com. The gallery is located at 1103 Abbot Kinney Blvd. Venice Beach, CA 90291.