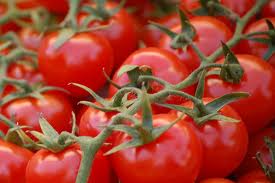 Did you have a great weekend?

With the clean blue sky and perfect weather, I enjoyed strolling around the Saturday Farmers Market. Apple season is underway, Early fall brings us freshly picked Macintosh, one of my all-time favs. We’re seeing plenty of Fuji, too. This medium-sized fruit is eclipsing Delicious apples in popularity at local farmers markets. Fuji’s sweetness is part of the allure. Biting into a tree-ripened Fuji, you’ll experience complex overtones and undertones of sweetness. It’s as if essence of apple perfume is lingering on the tongue.

I went to the Saturday market in search of apples. But once there, I couldn’t resist checking out what other fruits and vegetables looked good. The tomatoes looked so mouth-wateringly marvelous that I ended up buying about ten pounds of them. Yellow, orange and red/green heirlooms, some small enough to fit in a child’s hand, others twice as large as a grown man’s fist. And a good number of hearty Celebrity tomatoes: perfectly round, smooth and uncracked skin; on the smallish size, but good things do come in small packages. I plan to oven-dry many of these, so I can extend late summer’s tomato season into the fall and winter.

Oven-dried tomatoes don’t sound quite as romantically Italian as sun-dried tomatoes, but the drying process is a matter of hours, not days or weeks, and the food’s safely inside, away from flies and curious cats and the like.

The first batch of oven-dried tomatoes I made took around two hours in the oven at 200 degrees. I was able to cut down the time spent in the oven by slicing the tomatoes into ½ inch thick slices. Preheat the oven, line your baking sheets with parchment paper, arrange the tomato slices on the sheet (making sure they do not touch), and sprinkle lightly with salt. The salt helps draw out the moisture and intensify the flavor. If you’re on a low sodium diet, though, the salt is optional. Some people prefer to sprinkle them with a little bit of olive oil, too. Dried herbs, such as basil, oregano and thyme, can also be added. Place the tomatoes in the oven. I left the oven door open a crack; this reduces the amount of moisture in the oven and helps the tomatoes to dry faster. Ovcn-dried tomatoes are a little moister than sun-dried ones, but they can be safely stored in a ziplock bag in the freezer for several months.

Another storage method is to place dried tomatoes in a clean, sterilized glass mason or canning jar. Add enough extra-virgin olive oil to cover the tomatoes. Place lid on jar. Refrigerate. The oil will congeal in the refrigerator, but will re-liquidify once the jar is brought to room temperature. Make as much oil-packed dried tomatoes as you believe you’ll consume in a month. Best to be safe than sorry.

No one loves the taste of garlic in Italian food as much as I do, but it’s best to refrain from adding garlic cloves to the oil and tomatoes. In the 1990’s, two incidents of botulism were reported. Investigators determined they were a result of oil packed, garlic infused dried tomatoes which had been given as Christmas presents the year before.

If you have a little more time for the oven-drying, you can cut your tomatoes into half (assuming they are the size of a Roma or Early Girl or Celebrity) or thirds or quarters (for beefsteak and large heirlooms). Preheat the oven as before, line baking sheets with parchment paper and arrange the tomato slices on the sheets. The tomatoes should be sufficiently dried in three to four hours. Start checking them after they’ve been in the oven for around 2 ½ hours. After all that time and care, you want to make sure you end up with dried tomatoes which are shriveled, not burnt to a crisp.

Katie Malich’s fingers are crossed that her next batch of oven-dried tomatoes will come out perfectly – not overcooked or undercooked.