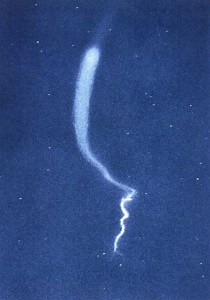 A severe “geomagnetic storm” in Earth’s outer atmosphere followed the impact last week of a coronal mass ejection, or stream of charged particles, resulting from a solar flare that occurred on Sept. 26. The Goddard Space Weather Lab reported a strong compression of Earth’s magnetosphere resulting from this impact. Simulations indicate that solar wind plasma has penetrated close to the altitude of geosynchronous satellite orbits. Stationary satellites (such as those used for satellite TV communications) could therefore be directly exposed to solar wind plasma and magnetic fields, resulting in serious disruption of service.

At the peak of this disturbance, auroras were sighted around both poles and in more than five U.S. states including Michigan, New York, South Dakota, Maine, and Minnesota.

A huge sunspot group, designated active region (AR) 1302, has been unleashing a series of solar flares over the past several days, recorded as extreme ultraviolet flashes by NASA’s orbiting Solar Dynamics Observatory (SDO).

None of the blasts have been directed squarely at Earth, but this could change as the sunspot turns toward our planet as the Sun rotates in the days ahead. Active region AR1302 is growing in size and intensity and shows no immediate signs of quieting down.

Each of the Sun’s current active regions, or spots, is larger than Earth, and the entire area of activity stretches more than 40,000 miles from end to end. The sunspot’s magnetic field is currently crackling with sub-X-class flares that could grow into larger eruptions as the sunspot group continues to rotate toward Earth. The Sun takes about one month for a complete rotation on its axis.

Solar observer Steve Padilla at Mount Wilson Observatory, where the Sun has been continually monitored since 1905, notes that we’re still at least a year away from the time of peak activity in the current 11-year sunspot cycle.

“Every Saturday and Sunday, we open the 150-foot solar tower telescope to the visiting public on Mount Wilson’s weekend walking tours, and show them the projected, magnified image of the Sun—and the people have been really excited to see these large sunspots,” said Padilla.

“But even though the current spots seem large, they are dwarfed by the image we show the visitors of the largest sunspot ever recorded—photographed on April 6, 1947,” Padilla added.

Sunspots are temporary phenomena on the Sun’s surface that appear visibly as dark spots compared to surrounding regions. They are caused by intense magnetic activity, which inhibits convection and produces areas of reduced surface temperature.

Although sunspots have temperatures of roughly 3000–4000°C, the contrast with the surrounding material (which is at about 6,000°C) leaves them clearly visible as dark spots. If a sunspot were isolated from the surrounding solar surface it would appear brighter than an electric arc.

Similar phenomena, varying in intensity in cycles like our Sun, have been indirectly observed on stars and are commonly called starspots. Starspot cycles were first observed at Mount Wilson Observatory, by Olin Wilson half a century ago. The magnetic nature of sunspots was also discovered at Mount Wilson, by the Observatory’s founder George Ellery Hale in 1908.

If you want to see a sunspot for yourself, take one of Mount Wilson’s public walking tours, held every Saturday and Sunday through the end of November. Tours begin 1:00 p.m. at the Cosmic Café, which overlooks the parking lot. Tour info: www.mtwilson.edu.