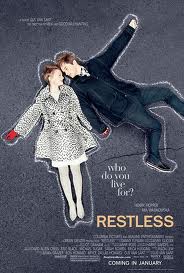 Many filmmakers have tried and failed at capturing romance or youth, but this will not only appeal to teens themselves but the tortured teen within us all. I may sound corny, but the magic of this movie is that it doesn’t feel manipulative, sentimental, or over the top. It’s seamless: unlike my attempt to describe it’s seamlessness.

It sounds like a cliché to say there wasn’t a dry eye in the theatre, but it’s true. We laughed, we cried, we called our moms to say we love them.

Stop what you’re doing and go see this movie. I’ve already seen this and I can’t wait to see it again.

Henry Hopper, lead actor and new to the screen, was powerful and gentle as well as heartbreaking and natural. A contradiction or a multi-faceted diamond: you decide.

Mia Wasikowska slid into a brand new character so easily, I didn’t recognize her as the girl who played Alice in Alice in Wonderland, or even her excellent, but very different performance in The Kids are Alright (another movie I loved.) She rocked this role. I would honor her with an award, but I don’t know how much meaning an award from a sometimes journalist who wrote this review in her underwear while eating chocolate will mean to the luminous Mia.

I admittedly am not a big budget movie goer. So if you’re looking for Transformers 2 or anything Michael Bay, etc, this is not the movie for you. If you have a heart and a brain and are not seeking to escape either, dive deep into Restless.

It was lovely at the round table interview with other members of the press to all speak highly of this movie. Though some writers present were ripping on other movies and other filmmakers, the praise was unanimous for Restless.

We interviewed the producer, Bryce Dallas Howard, who not only birthed a beautiful film and career of newcomer writer, Jason Lew, but is up to her own gestational conquest. Though ripely pregnant with a second child, she was energetic, delightful and beautiful. She fears her talents will be attributed to nepotism considering her father Ron Howard’s production company Imagine is part of her team, but I feel it’s clear her passion and ability is readily apparent.

You can see in the actors’ performance that director Gus Van Sant lets the moment blossom with little guidance and is not interested in heavy handed control. I have no idea how he stays forever young and vulnerable. When I asked him how he’s kept his youth, and he basically said he didn’t know he was supposed to grow up, or that growing up didn’t appeal to him. He is full of trust in his actors and his team. He is a true artist as well as an open and beautiful person.

I’m immediately taking my ten year old daughter, and want her not only to have a cathartic experience of the ups and downs of growing up, but to see what a movie is supposed to be like and to be truly inspired to be an artist herself. If only I could rename her “Gus.”