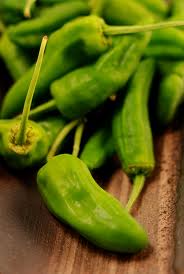 The downtown Culver City Farmers Market is held each Tuesday from 2 pm to 7 pm on Main Street between Venice and Culver Blvds. The Culver South market is held on Saturdays from 7:30 a.m. to 1 p.m. in the northeast corner of the Westfield Culver City parking lot, at the corner of Hannum and Slauson.

Katie Malich generally roasts her peppers on the stove top. If you’re not grilling for a crowd, there’s less fuss, less mess, and less waiting for the proper temperature.