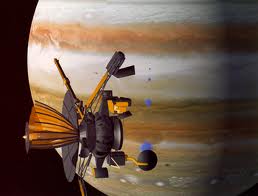 Juno’s detailed study of the largest planet in our solar system will help reveal Jupiter’s origin and evolution. As the archetype of giant gas planets, Jupiter can help scientists understand the origin of our solar system and learn more about planetary systems around other stars.

“Today, with the launch of the Juno spacecraft, NASA began a journey to yet another new frontier,” NASA Administrator Charles Bolden said. “The future of exploration includes cutting-edge science like this to help us better understand our solar system and an ever-increasing array of challenging destinations.”

Juno covered the distance from Earth to the Moon (about 250,000 miles) in less than one day’s time. It will take another five years (and 1,740,000,000 miles) to complete the journey to Jupiter. After arrival, the spacecraft will orbit the planet’s poles 33 times, using its collection of eight science instruments to probe beneath the gas giant’s obscuring cloud cover and learn more about its origins, structure, atmosphere, and magnetosphere—as well as looking for a potential solid planetary core.

With four large moons and many smaller moons, Jupiter forms its own miniature solar system. Its composition resembles a star’s, and if it had been about 80 times more massive, the planet could have become a star instead.

“Jupiter is the Rosetta Stone of our solar system,” said Scott Bolton, Juno’s principal investigator from the Southwest Research Institute in San Antonio. “It is by far the oldest planet, contains more material than all the other planets, asteroids and comets combined and carries deep inside it the story of not only the solar system but of us. Juno is going there as our emissary—to interpret what Jupiter has to say.”

Juno’s name comes from Greek and Roman mythology. The god Jupiter drew a veil of clouds around himself to hide his mischief, and his wife, the goddess Juno, was able to peer through the clouds and reveal Jupiter’s true nature.

A plaque dedicated to the famous astronomer Galileo Galilei will be carried to Jupiter aboard the Juno spacecraft.

Among his many achievements, Galileo Galilei discovered four moons orbiting Jupiter, when he turned his newly built telescope to the sky in 1610. These moons—Io, Europa, Ganymede and Callisto—are also known as the Galilean satellites.

The plaque, which was provided by the Italian Space Agency, measures 2.8 by 2 inches, is made of flight-grade aluminum, and weighs six grams (0.2 ounces). It was bonded to Juno’s propulsion bay with a spacecraft-grade epoxy. The graphic on the plaque depicts a self-portrait of Galileo. It also includes—in Galileo’s own hand—a passage from notes he made in 1610 of his observations of Jupiter, archived in the Biblioteca Nazionale Centrale in Florence, Italy.