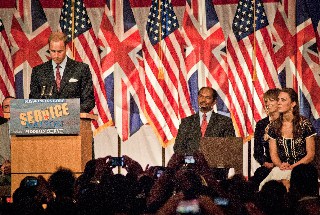 On Sunday, July 10, Kid Scoop Media stood proudly alongside both local and international media as we anxiously awaited the arrival of Their Royal Highness, The Duke and Duchess of Cambridge visit to Sony Studios.

I was as ecstatic as Lizbeth Navar, the 11 year old “Scooper” and Culver City resident whom I asked to cover the event. During a break from the speakers that afternoon Lizbeth yelped, “This is the best half birthday ever!”

Together we spoke to many people, the organizers, the veteran’s and their military spouses who were at the job fair anxious to find work as civilians and begin a new chapter in their lives.

All expressed gratitude for the participation and collaboration between Service Nation: Mission Serve and The Foundation of Prince William and Prince Harry whose key focus is to integrate former service men and women into civilian life.

The Mission Serve job fair took place inside the infamous Sound Stage 15 where the MGM classic “The Wizard of Oz” was shot over seventy years ago. The stage was decorated with the red, white and blue flags of both nations who not only share the same colors but who are proudly committed to the same cause.

The Royals arrived to a rock star welcome. Blasting on the speakers was a slice of Americana as Van Halen’s “Right Now” piped out and on as the Royals were greeted by many people.

Prince William eventually took the podium and began his speech by saying, “This is our last stop on our tour of North America but to my mind it is seriously one of the most important. This is because it is about men and women who of their own free will choose to put their lives on the line for their country.” He continued that “It’s also about our other halves — the half that makes their loved one’s duty and sacrifices possible and worthwhile.”

The crowds cheered and cheered as the cameras clicked and clicked with great enthusiasm before the charismatic presence of the future King and Queen of England.

The day was an anglophiles dream and exciting for many reasons. It was inspiring to see a child genuinely interested in the importance of charitable work. It was interesting to learn so much about the challenges veteran’s face once leaving active duty and encouraging to see the work being done by our two nations to support them.
What emanates so profoundly through the Prince in his look and in his compassionate mein is his mother’s spirit, the late and great Princess Diana . The day was beautiful and unforgettable. Kid Scoop Media was honored to have covered another unforgettable moment in time.
We are always looking for “scoopers” contact us at [email protected]