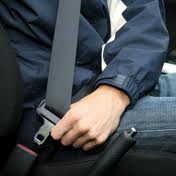 One Million Californians Still Not Buckling Up– As families across California plan for upcoming travel, there’s not much you can do to control the cost of filling up the gas tank, but you can avoid a costly ticket by making sure that everyone in the car wears their seat belt. Law enforcement throughout the state, including the Culver City Police Department will be looking for unbelted drivers and passengers as part of the 2011 Click It or Ticket mobilization, May 23 – June 5. The fines and fees for first time adult seat belt violations is a minimum of $142. For children under 16, the fine is $445 for a first time offense.

Because nighttime passenger vehicle occupants are among those least likely to buckle up and most likely to die in crashes when unrestrained, nighttime enforcement has become a priority of the Click It or Ticket mobilization. Nationwide, of those who died in nighttime crashes in 2009, nearly two-thirds (62 percent) were not wearing seat belts at the time of their fatal crashes.

Many nighttime traffic deaths can be prevented if more motorists simply start wearing their seat belts. Law enforcement throughout the area will be looking for seat belt violators, day and night Citations will be issued without warning. It’s not just about avoiding a costly ticket; it’s about keeping the ones you care about alive. Remember to buckle up on every trip, day and night.

California’s current seat belt use rate of 96.2 percent is at an all- time high, but that still leaves nearly one million people who are not buckling up, putting their lives at risk every time they get into the car. The Click It or Ticket mobilization is credited with increasing the state’s adult seat belt usage rate from 92.5 percent in 2005 to 96.2 percent in 2010.

More than 600 permanent Click It or Ticket highway signs, which have been up since 2005, have been updated to reflect the ‘Minimum $142’ message as a reminder to motorists that failing to buckle up is costly.

Properly restrained drivers, passengers and children have a 50 percent better chance of surviving a crash than unbelted occupants. Those ejected from vehicles in crashes or roll-overs are up to 35 times more likely to die than restrained occupants. In 2009 alone, seat belts saved approximately 12,713 lives nationwide. In California, it is estimated that 320 people who were killed in 2009 would be alive today if they had been wearing seat belts.