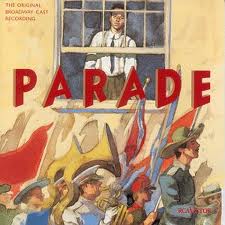 More serious theater just over the horizon- Kentwood Players will hold auditions for the musical “Parade” with book by Alfred Uhry and music and lyrics by Jason Robert Brown on Saturday January 15, from 11:00am to 4:00pm and Sunday, January 16, from 6:00 to 10:00pm at the Westchester Playhouse located at 8301 Hindry Avenue in Los Angeles , CA 90045 . Callbacks will be held on Monday, January 17 at 7:00pm. “Parade” will be directed by Ben Lupejkis and produced by Victoria and Rocky Miller, with production dates from March 18 to April 23, 2011 with performances on Friday and Saturdays at 8 p.m. and Sundays at 2 p.m.. It is produced by Special Permission from Music Theatre International.

“Parade” is a fascinatingly evocative musical based on the true story of Leo Frank, a Jewish man who was convicted in 1913 of the rape and murder of a 13 year-old factory worker in Atlanta , Georgia. It is a riveting murder mystery, a gripping courtroom drama, a moving love story, a searing social commentary, but above all, in the humble words of its Pulitzer Prize winning playwright, Alfred Uhry, “It is an entertainment.”

Director Ben Lupejkis and musical director Scott McKenzie are looking for all age ranges for singer/actors who move well. Cast includes several roles for black actors and actresses, as well as singer/actors who play banjo, guitar, fiddle, trumpet, clarinet, drums. If you play an instrument, please bring it to the auditions. All roles are open and the director requests that you be familiar with the show. Those auditioning should be prepared to sing selections from the show or in the style of the show and will be asked to read from provided script sides. An accompanist will be provided. Please dress to move, as auditioners will be asked to learn a short routine. Auditioners are asked to bring headshot, resume, and appointment calendar to the auditions. Advance appointments are not necessary. For more information, go to www.kentwoodplayers.org and select auditions.

On July 2 the Kentwood Players 2010-2011 Marcom Masque Awards Dinner and Awards Ceremony was held at the Four Points by Sheraton Hotel in Culver City, organized by Shari Barrett and Linda Reinhardt, with Forbidden …[READ MORE]