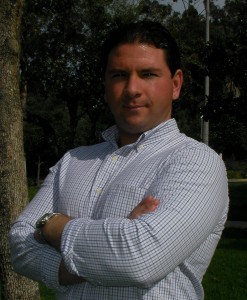 How to communicate to the community who Rafael Garcia Rangel, a candidate for State Assembly of the District 47 living in the Lindberg Park area of Culver City, is? The answer came to me on this afternoon ‘s jaunt to Menchies with my kids. “So what yah writing about Mom?”Adam, my ten year, old asks. It is in my answer to him, in yet another one of those parental moments of trying to explain without too much desperation in one’s voice (lest the child hears it like Charlie Brown – “wah wah wah wah wah wah” no matter what the parents were saying) that I got my answer.

“He seems pretty cool” I started with a nonchalant, I don’t really care if you’re listening, kind of edge “and his story is super interesting and heroic.” This is the point where I made contact. Matt, my seven year old, brakes from his Ninja war crying in the back seat of the car to ask, “He’s a hero? For real? In our neighborhood? Cool! What house? Can I meet him?”

Granted I cannot tell Matt that Rafael will show him or even his big Brother Adam how to leap buildings in a single bound. There seem to be so many things that Rafael can share with my boys, however, that if they actually learned, would make me a very proud Mom.

“It’s the experiences I have had over my life-time which have helped me shape myself into the man I am today” Rafael told me as we sat in the sun lit café where we spoke. Rafael was born on January 4, 1976 in Santa Monica, California to immigrant parents, and spent him summers in a small village in Mexico with his grandparents. “ It was during these summers in my grandparents village that I learnt what a strong sense of community was all about.

Everyone was genuinely interested in eachother’s well being. This bred a very strong sense of safety and trust and hence an edict to know the little things that made up everyone’s daily life “This deep concern for humanity, planted when he was just a small boy, continued to grow and flourish and eventually manifested in the many things that define Rafael’s life today. Rafael graduated from college in 1998 with a degree in sociology from UC Santa Cruz. After graduating from UC Santa Cruz, at the age of 22, Rafael was hired to teach educational and career planning at Crenshaw High School under LAUSD’s emergency credential program.   After Crenshaw High, Rafael was hired by Westside Regional Center here in Culver City, as a case manager for children with developmental disabilities. It was at Westide Regional that Rafael’s passion for serving and empowering people and families in need, prompted him enroll at Loyola Marymount University’s School of Education where he received a Master’s degree in Counseling in 2001.
In 2005 Rafael started a summer camp and after-school Spanish language acquisition program with his wife, high school sweetheart Veronica Nunez (also a graduate in sociology at UC Santa Cruz.)  After operating the program for two years Rafael and Veronica fulfilled a college dream to travel around the world together as sociologists.  They spent eight months visiting eighteen countries which opened their eyes to the people and cultures that made up what Rafael considers our “global village.” He explained to me “I’ve seen over 25 different governments at work and how their management or lack there of directly impacts peoples’ lives for better or worse.  California is my home and her citizens are my concern. I believe California should not consider itself immune to the downturn in the global economy.  We must adjust and make changes to how we do business now and not wait until people are on the streets, homeless and/or protesting.”

When Rafael and Veronica returned from their travels abroad, Rafael returned to the work he considered so rewarding at Westside Regional Center. There were hiring freezes do to budget cuts, but Rafael was able to secure a position as a contracted employee providing counseling, case management and advocacy for his clients. Veronica went on to teach, something she does currently, at a local school in Santa Monica.

One of the central themes in Rafael’s life is that hard work and taking on the opportunities your society affords you can take you far. Rafael was certainly not raised with a silver spoon in his mouth. He learned from his parent’s determination to provide their two children, Rafael and his younger brother, Jose, with a promising future, that hard work and commitment do in fact pay off. Rafael’s father has had the same union job as a gardener for over thirty years and his mother was a factory worker in Santa Monica. Through training at Santa Monica College, she now works as an administrative assistant for the Exceptional Children’s Foundation. Because of their hard work, Rafael’s parents were able to buy the home they are currently living in mid city Los Angeles in which Rafael and his brother grew up. Education was paramount to Rafael’s parents. In fact, after his pre-school years at Head Start, Rafael went to St. Anne’s parochial school in Santa Monica for the first eight years of his schooling where he claims he learned one of his central values by which he runs his life. “My faith has taught me that fair is fair and justice is justice.” He goes on to add “that is why I am running for state assembly. Not only do I feel I am here to serve the people, but I want to insure that fairness, justice and progress presides in California the place I will always call home. Fairness means we must elect a new group of true public servants that have the people of California at the forefront of their decision making, not their egos or political careers.”

Rafael went well beyond his faith to help himself develop and grow into the contributing adult he is today, seeking a number of opportunities provided to students from low income homes. He took banking classes while in high school and was hired as a bank teller his senior year. He remained a part time bank teller throughout college to help pay for his studies.  In the summer of 1996 he was selected to participate in the AFL-CIO’s Union Summer internship program in Sacramento where he encouraged workers to unionize, walked precincts in support of working people’s issues and helped register voters in low-income neighborhoods. Rafael also participated in a summer long university program, Summer Bridge, where incoming university students of low-income households were introduced to college life. After a few years at Santa Monica College, Rafael transferred to UC Santa Cruz where he received his B.A. in Sociology in 1998.  While in Santa Cruz, he participated as a mentor in a year long program for farmworkers’ children suffering from low self-esteem.  After college, he and his wife saved their money carefully and after buying their first condominium were able to make the jump to a home in Lindberg Park in 2002. Not bad for a thirty-something young couple, at the time of purchase 26 years old, working to make a go of it in one of the most expensive cities in the Nation.

Rafael sums himself and why he is running for State Assemblyman of the 47th district in the following way: “My Policies are a direct result of my life experiences: The 47th District is one of the most ethnically, financially, and industrially diverse districts in California.  To truly represent the diversity of the 47th District’s needs, a candidate must have a diversity of experiences to address its diverse population.  Many are immigrants from around the world.  Immigrants, and natives all contribute to the eclectic atmosphere that makes our great metropolitan community what it is.  While speaking twenty languages would be helpful, the most important language a candidate must have for a District such as the 47th is the universal language of progress.“Rafael is leading a somewhat un-orthodox campaign. He isn’t opposed to anyone donating to his campaign, but it’s not what he asks for first:  “In lieu of a  monetary contribution I ask that you suggest me to your friends and family who live in the district, to join my Facebook site and suggest me to all of your Facebook friends, or send emails to others in the district. “Rafael believes that the public is so overwhelmed with telemarketers, spammers, petition and donation gatherers, junk mail, door-to-door salespeople, etc. that when they actually come in contact with a candidate who wants to do good they brush them off. That is why he believes word of mouth, person to person recommendation, is a better way to go.  He has hope in the people of the 47th District claiming “We as a district can show other districts throughout the United States you don’t have to rely n political interests to be a part of government.”

I am not sure how much Adam and Matt absorbed as I preached from the pulpit of my mini-van. I hope they got some of the central themes I was trying to get across to them before the sugar from the yogurt (not to mention the pile of  toppings they poured on.) I hope they got that there are people in this community who are trying to make our world, a better place. These people are role models for them to learn from. I hope Adam and Matt understood that when you face adversity  it helps to shape you into a person you will, one day, be proud to be.  I hope my sons got from my short summary on Rafael Garcia Rangel, that the Code Name Kids Next Door characters bouncing off of our television screen and into our daily lives…. aren’t the only heroes that are hanging out in  Lindberg Park.