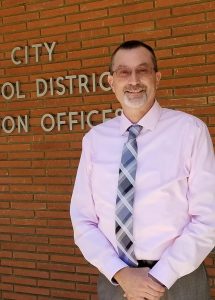 CCUSD is proud to announce the appointment of Robert Quinn as the new Assistant Superintendent of Business Services.

Robert Quinn currently serves as the Director of Information Technology for the Culver City Unified School District. During his 18-year tenure in that position, Mr. Quinn has used his skills and knowledge of 21st Century Technology to implement high performing technological solutions that allowed for full educational use of technology for 7,000 students and 800 employees. His passion for looking past the events of today and into the possibilities of tomorrow led him to obtain his Chief Business Official certification from the California Association of School Business Officials after successfully completing the School Business Management Program through USC’s Rossier School of Education.

Mr. Quinn is well versed on the inner workings of state and local public school finances, governmental laws, budgets and changes that impact districts at the local level. He understands the Measure CC Bond and that the related construction projects are a high priority to CCUSD and has immersed himself in every area of that process. He has studied the intricacies of construction management and financing (Lease-Leaseback, Multi-Prime, etc.) and has worked closely with Harris & Associates and Balfour Beatty.

Mr. Quinn currently serves as the President of the Management Assocation of Culver City Schools (MACCS) and plays key roles on the management classified negotiation team and the CCUSD Partnership group, helping to improve conditions for employee groups in areas such as wages and work environment.

Mr. Quinn also has strong connections to the Culver City community – he has lived in the city for 20 years, is married to a life-long Culver City resident who graduated from Culver City High School, and both of his children went through CCUSD schools, graduating from CCHS in 2008 and 2011.

Mr. Quinn is a committed, collaborative and futuristic leader who will work with all school stakeholders to make sure CCUSD is using its spending power to maximize outcomes for a world class education for our students.

Mr. Quinn will be presented to the School Board for approval at the August 22nd Board meeting. He will officially begin work in this position on September 1st, working alongside Mike Reynolds until his retirement.