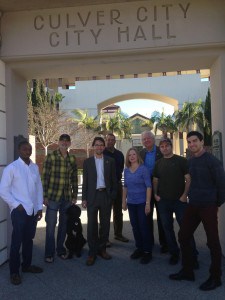 Surrounded by supporters, Christopher Patrick “CPK” King, filed his candidacy papers with the City Clerk’s office this past Monday afternoon, Jan 13, 2014. King was beaming as he stated to local media, “I didn’t think I could be any more excited than I was a few months ago when we did our initial launch party, but I am even more excited today.” He expressed his appreciation for the encouragement he has received throughout the community in his quest to be a Culver City Council member. Present at the filing was a diverse group including long-time residents, local activists and former Mayor and Boy Scout Troop Leader, Richard Marcus.
King currently serves as President of the Culver City Rotary Club, is a Board Member of the Culver City Chamber of Commerce, acts as Vice Chair of the Culver City Homelessness Committee, and is a Board Member and CFO of Shoes for the Homeless, Inc., a local Culver City non-profit organization founded by Lindberg Park resident, Dr. Ira Diamond. In addition, King volunteers much of his time to Beit T’Shuvah, a recovery program and congregation that helps recovering addicts. He finds great personal satisfaction in helping make people’s lives better. Through his broad community activism he is making a difference in many lives.
By serving on the City Council he will be fulfilling a life-long passion for public service and wants to “make Culver City an even better place.” The youngest candidate on the ballot at 31, King hopes to bring a new energy and vision to the city. To accomplish this goal he will start with a comprehensive community and economic development plan. He calls this plan CulverVision 2020 and it involves redoing the City’s Master Plan by including residents, community groups and businesses. The plan would develop specific and measurable goals to be achieved by the year 2020. Chris would also form a Neighborhood Advisory Panel in which our many neighborhood organizations, service clubs, parent groups, and volunteer associations would convene to identify city-wide priorities.
As a property owner and local business owner in the mortgage industry in Culver City, the candidate understands the need for housing opportunities given Culver City’s lack of housing stock. Resources exist for change, and he has been working on partnerships between developers, government and community members to accomplish this change.
King looks forward to meeting and speaking with residents during the campaign. He can be emailed at [email protected], followed on Facebook at Christopher Patrick King, Tweeted @CPK4CC, and viewed on his website, www.cpk4culvercity.com.